‘Netflix causes cancer’ is the title of an article written by Hank Campbell, who is the President of the American Council on Science and Health. It’s a satirical title of course, and the article that followed was designed to show how epidemiology can prove that almost anything can either cause cancer, or protect against it, which is why epidemiology is an excellent vehicle for creating moral panics about alcohol, amongst other things. My article today relates back to my last blog for Propel Opinion in which I referred to an opinion piece in the journal Addiction, in which the author wrote about alcohol as a cause of cancer at seven different sites in the human body. There was nothing new in this article, but the media picked up on it and declared it was a new study. The headline read: “Finally proof that alcohol causes cancer”, when in fact it was just an article, an opinion piece.

Hank Campbell, in his article, had this to say: “You may have seen renewed recent media claims that alcohol is linked to cancer, based on a new commentary in Addiction. While overuse of alcohol can certainly cause something like fatty liver disease and then cirrhosis, so can too many cheeseburgers. Lots of things can be harmful when misused, that is why the American Council on Science and Health talks about dose-response when environmentalists only want to talk about hazard.”

And then this: “It has been commonly established in longitudinal studies that alcohol in moderation has some positive effects, like with cardiovascular disease risk, but then some meta-analyses say it causes cancer. Which is it? If you are in the media, it doesn’t matter; you write about both as the Big Story. Many of us are reductionists; we want to eliminate bad luck and true randomness as much as possible, so we try to find cause and effect for everything. Which is why we love to read articles claiming X is a Miracle Product or later that X will Cause Cancer – and we do, over and over, like last week with alcohol causing cancer. Again.”
And then he goes on to give a template for how activist academics can misuse science to get publicity for their pet cause by following a well-tried template. Here’s how it works, the way to show Netflix causes cancer in 10 easy steps:
There you have it. Your first epidemiology paper. And this will get read, because a lot of people have Netflix.
My point in quoting this article is to illustrate how activist academics exploit fear of cancer in relation to alcohol precisely in order to generate headlines and to justify the “there is no safe level of alcohol consumption” narrative. Below is a graphic which illustrates the distribution of studies that show how what we eat either causes or protects against cancer: 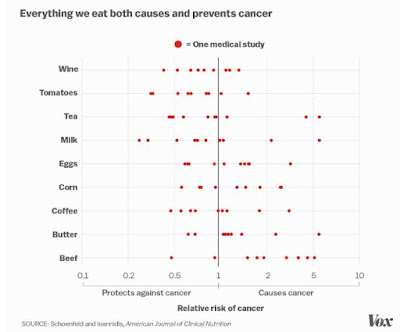 Paul Chase
Posted by Unknown at 04:55